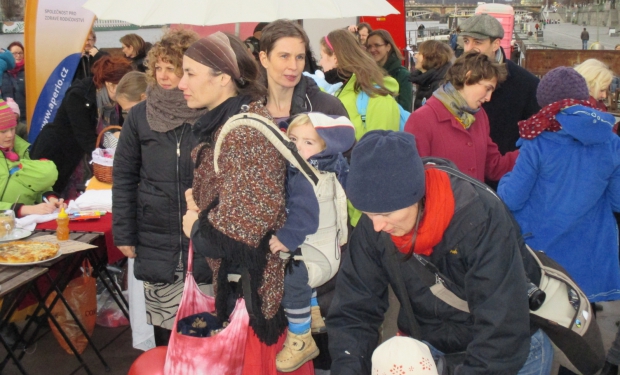 In the last 18 months the Czech women´s lobby realized project "We defend the rights of Czech women in Czech Republic". In addition to issues of obstetrics project is addressing the issue of gender equality in society and through monitoring and lobbying in the area of equality between women and men, lobbying for the ratification of the International Istanbul Convention that will improve the status of women facing violence, and organizing a series of happenings (INTERNATIONAL WOMEN'S DAY, One Billion Rising) and actions to draw attention to the current gender issues and women's rights in public.

Working Group for birth issues brings together non-profit organizations that aims to improve the situation in the Czech obstetrics. We also work with the League of human rights and the various independent specialists. The group consists of the representative of Aperia, the Czech Association  dul, Czech Chamber of midwives, the movement for active maternity, the League of human rights, Nesehnutí, the birth House at Stork and the Union of midwives. We meet regularly every two months. We plan campaigns, happenings, press releases, and we are a safe place for sharing and mutual support. Therefore, this group of women has implemented maternity agenda of project of the Czech women's lobby "we defend the rights of Czech women".

In cooperation with the League of human rights we are working on legal documents for parents and midwives (e.g. informed approval within the care of a community midwife). Lawyer Susan Candigliota under the project "We defend the rights of Czech women" she gave legal advice and representation of families in hearings. Part of her work was the analyzing of documents for public appearances or processing of leaflets for pregnant women and their families. One of the outputs of the project is the elaboration of comments and observations on the current inadequate legislation. Czech women's lobby also produced the movie, which captures the comments of the Czech expedition to a hearing of the European Court of human rights.

The Government Council for equal opportunities of men and women formed working group made up with experts and specialists, in which have the Czech women's lobby and its member organization own representatives. We also meet regularly with representatives of the public administration to submit them our views. For midwives, doctors, the media and the Deputy and representatives of public administration we organized a lecture led by biostatistician Markéty Pavlíkové "How to work with research in the field of maternity care" (from lectures originated as a short film, so the record of entire lecture).  The current comments of Markéta Pavlíková you can watch on her website www.biostatisticka.cz (within the project she elaborated analysis related to birth houses abroad). Deputy of the Czech women's lobby also presented their objections for the Czech obstetrics to the OSN Committee for elimination of all forms of discrimination against women (CEDAW), which in March 2016 issued its final recommendations for the Czech Republic. Among others, the Committee called on the Government to ensure the real existence and availability of birth house with care of midwives. Microbiologist Jarmila Hnilicová (www.jaksekderodi.cz) and lawyer Susan Candigliota (League of human rights) have been working on the publication of statistical information about the care of individual Czech maternity wards (such as how many where carried out by section, acute section, births with pliers, perineum cut, etc.). The differences between the maternity wards are huge in some indicators (for example, the percentage of women who have some injuries after vaginal birth, ranges from 20% to 92%!) and the data shows that for these differences can, in particular, different practices of doctors/midwives in each maternity wards. We want to pass the discussion about the quality of care into professional ground - part of data would be presented in birth house U Čápa on the second common conference of the Czech gynecological and obstetric society ČLS JEP and the Slovak gynecological and obstetric society SLS in 2015. Furthermore, we want basic information about care in each maternity wards have been published every year. Zuzana Candigliota in February won the Open Data Stand Up organized by Otakar Motejl Fund with her project- open data on maternity wards. Basic statistics about specific maternity wards, which the Institute of health information and statistics refusing to issue, are abroad often commonly available (eg. Slovakia). Experiences from other countries also show that the disclosure of data on the quality of care in health care can lead to significant improvements of this care, which is a further advantage in addition to the availability of information for pregnant women.

Leaflets for parents and health professionals

We decided to summarize the latest information from mother and child health ​​care area under the three simple and clear leaflets (leaflets for parents; for health professionals and a leaflet containing legal information).

Leaflets are currently available at the venues of member organizations as well as in electronic form on www.unipa.cz. Leaflets are going to be available at maternity centers, at Czech Association of Doulas, at Midwives Centre’s as well as on websites of member organizations (e. g. The NGO Market, Picnic with a midwife, World Week of Respect for Childbirth, Trade Fair of Maternal Hospitals and Áčko fest). On the occasion of releasing leaflets we are going to launch the website jsemtehotna.eu and everything will be happing in cooperation with co-working parents.

„The leaflet for health professionals contains the initiative of 'Baby Friendly-Hospital' which already existed 25 years ago”, notes Jitka Charvátová from the Birth Centre U Čápa. However, 30% of Czech Maternity hospitals still has not obtained this status. Nor the rest of hospitals does not follow all 10 steps of successful breastfeeding. Besides, International Federation of Gynecology and Obstetrics (FIGO) International Confederation of Midwifes (ICM) and International Pediatric Association (IPA) issued in 2015 new directives called 'mother baby friendly hospital initiative'. Those formulated 10 principles of care calling mother and child - an inseparable unit - MotherBaby. Even modern science agrees on the base of optimal maternity care which should be meeting common needs of the mother and child. So one of our leaflets represent these International expert materials for Czech medical workers.

Within two years we have undertaken numerous campaigns and events for parents. For publishing our activities, projects and documents we created a new website www.normalniporod.cz, which was inspired by similar British movement. The website provides basic information, advisory service and it serves for presentation of our press releases and invitations. In 2016 we organized event celebrating the World Week of respect for Childbirth in Brno and Prague and we held seminar for organizers in other cities. Furthermore, we participated on the annual Active parenting conference in Brno.

On the occasion of decision of European Court of Human Rights, we sailed a Cruise for Normal Obstetrics associated coupled with a press conference and an exhibition of episiotomy.

Standards of care and best practices

Huge deficiency is the lack of concepts in health care, specifically care for women and children made by Ministry of Health. This vacuum is partly filled up by a non-profit organizations and professional association of midwives. During our project, a team of Czech Association of Midwifes members and Czech Chamber of Midwives members worked together on designing the principles of midwifery care. The standards created, will be published on the websites of both professional organizations and will be binding for all members.

We have also translated a range of international standards and documents of International Confederation of Midwives (ICM).

Through press releases and press conferences (eg. In Czech hospitals with at birth still fail to comply with recommendations of the World Health Organization) we try to inform media regularly, we also manage several Facebook groups and events and we are always available for journalists and further expert consultation.

In conclusion, I would like to thank all colleagues and co-workers as well as to volunteers who joined the project. Together, we have a power which will help us to implement necessary changes.

Organization participated on the project:

The project included an information campaign Normal childbirth and conferences Active Parenting and World Week of Respect for Childbirth.