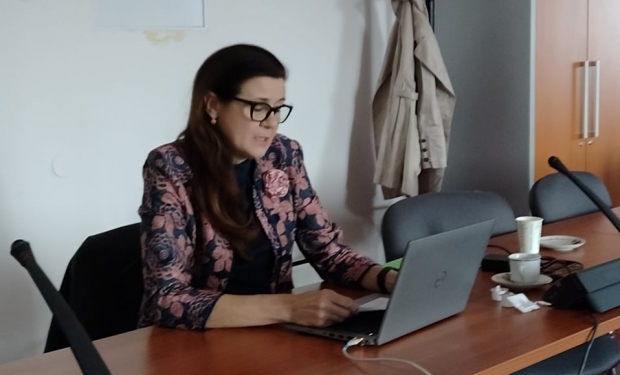 The side event, co-sponsored by France, the Czech Republic and Sweden in the framework of the Trio of the presidencies of the Council of the European Union 2022-2023, is an opportunity to promote a gender perspective in the fight against climate change. Ministers, experts and civil society representatives will focus on the full and equal participation of women and girls as agents and beneficiaries of sustainable development and their crucial role in climate change adaptation and mitigation, at local, national and international levels.

Marta Smolíková, the chair of CWL, participated as a panelist and presented our perspective among other expert speakers about:

Gender analysis on the link between economic, environmental and gender equality issues;

Concrete initiatives on speeding up implementation of effective gender equality in climate and ecological transition policies;

Women’s full, equal and meaningful participation and gender mainstreaming have served as corner stones in numerous commitments such as the Beijing Platform objective n°11, the Paris Agreement, Sustainable Development Platform for action for 2030, the Gender Action Plan for the UN Framework Convention on Climate Change adopted at COP25 for the period 2020-2025. They are core principles of sustainable development.

In practice, there is still a need for a more concerted effort and focus on action in integrating gender equality in sustainable development in public policies and public awareness, at local and international level. Civil society and women’s organizations have an important role to play and their participation in decision-making on adaptation to climate change, environmental, energy, town and country planning policies is key.

For the French government, gender equality and climate constitute mainstreaming approaches for its external action and feminist diplomacy. France promotes multi-actors coalitions on gender, climate, biodiversity and environmental issues. The French Agency for Development (AFD) has launched a new feminist fund with a program on climate and gender driven by civil society in France and in Africa.

The Czech government has recently adopted its Gender Equality Strategy for 2021-2030. In the Strategy, the Czech government commits to take specific actions to strengthen gender mainstreaming in environmental policies and financing. Gender perspective is taken into account in projects focusing on protection of environment and just transition to climate neutrality.

The Swedish Environmental Protection Agency, the Swedish Energy Agency and the Swedish Gender Equality Agency recently drafted suggestions for a strategic approach to gender mainstreaming in the implementation of the Paris Agreement in Sweden. For example, Gender equality considerations were integrated in 87% of all Swedish bilateral climate finance already in 2018.

Across the globe we see civil society organizations in North and Global South, women and persons demanding greater action on climate change. And in response to the crises, women and organizations working towards equality and human rights are active inspirations for solutions and offer numerous initiatives in areas that have direct impacts on climate change: agroecology, social and solidarity-based economy, decentralized energy companies, biodiversity preservation, etc.

There is a need to recognize that gender-relations, roles and responsibilities exercise important influences on women’s and men’s access to and control over decisions, assets and resources, information, and knowledge and that the impacts of climate change can exacerbate existing gender inequalities. Furthermore, climate change initiatives are more sustainable, equitable and more likely to achieve their objectives when gender equality and women’s empowerment considerations are integrated into the design and implementation of those initiatives. Therefore, experiences of women and girls in all their diversity must be taken into account at all levels and women must be part of negotiations.

Gender equality and climate change issues are cross-cutting and involves all actors: governments, civil society organizations, development institutions, local governments and private sectors. The topic could therefore be an opportunity to promote multi-actor cooperation, at a strategic time midway through Agenda 2030 and as countries update their nationally determined contributions to the Paris Agreement, two milestones for urgent structural changes.

The side event will endeavor to answer questions such as:

how to achieve more effective results? What are the levers to ensure that existing commitments will be put into practice?

What are the obstacles identified and how can they be removed?

How can updated nationally determined contributions to the Paris Agreement and SDGs national strategies mainstream gender?

Program of the side event