Ecuadorian women struggle for their choice

Ecuadorian women struggle for their choice 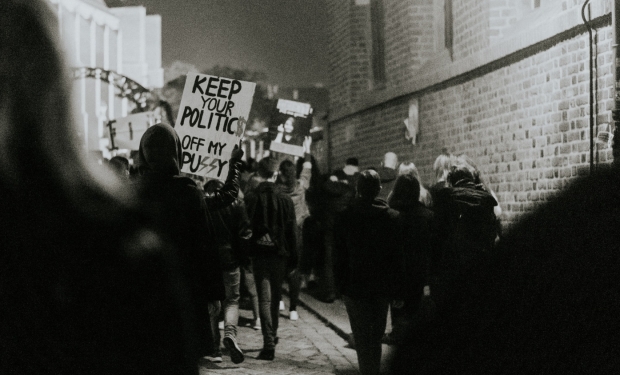 According to the Ecuadorian Criminal Code approved in 2014, any woman who allows someone or herself to get an abortion will be penalized up to two to six years of prison. One can only escape this sentence if the woman's life is in danger or if the pregnancy is a result of the rape of a woman with a mental disability.

We live in 2021, yet governmental appropriation of women's bodies still exists and from what we have witnessed in the region, it’s a hard battle to win but women will not surrender.

Church and state were separated after the liberal revolution of the 19th century, making Ecuador into a laic state. However, until the present day, we can witness the religious influence in public policy and governmental decision-making, mostly regarding women's reproductive rights.

“It is moving and tragic to see how they suffer and scream with the labor pains; these girls have an infinitely lower pain threshold than an adult woman does and they suffer greatly. Generally, teenagers suffer more, and it is worse when her pregnancy is an unwanted product of rape, they yell a lot and some ask to have “that” removed or operated on, sometimes when we see that it hurts a lot, we offer them epidural anesthesia.”

Clandestine abortions are the second largest cause of female death in Latin America, 37% have been girls, teenagers, and young women under the age of 24. Education and lifestyle get profoundly affected by teen pregnancies, almost 7 % of pregnant teenagers have abandoned the school system because of the pregnancies. The majority of these pregnancies involve physical, psychological, and sexual violence proves study. When survivors attempt to talk about sexual violence the vast majority are not seen as credible. This is not an uncommon situation in Ecuador, one out of three sexual abuse survivors are not believed - 8 % of teenagers get pregnant from people older than 30 years, and 80% of those pregnancies are a result of sexual violence according to the Ecuadorian National Health and Nutrition Survey.

The problem evolves on the mere fact that, being legal or illegal, undesired pregnancies are not going to stop from happening nor the insecurities behind it. Almost 16 % of maternal deaths are caused by clandestine abortions, also 45 out of 100.000 women die because of clandestine abortions. The situation gets more complicated for females younger than 25 years old, with little or no access to education, no economic resources, and the majority being afro-Ecuadorian. Data broadcast the connection of social injustice, discrimination, and abortions.

During testimony from the study Vidas Robadas: Sil, a 15-year-old female, a survivor of sexual abuse from her father, stated “Sometimes I think about my life, I feel sad how certain things happen, sometimes I think why did my dad do this to me”. Women who face violence and abuse have to face more violence in the form of forced maternity, which greatly impacts the lives of young girls and women.

A healthcare battle against culture and misinformation

Abortions happen in all countries around the world, in all social classes, and within all religions. It has been always perceived from a legal, religious, moral, and ethical point of view. Nevertheless, it has barely been considered from a public health point of view or a woman’s rights perspective (at least in all countries in which it is still illegal). Women's health includes psychological, social, and physical aspects. All risk practices of abortion are considered to be a matter of public health because of multiple factors: the number of women affected by it, the longevity of the problem within history, and the impact it has on reproductive health for thousands of women in society.

Even Article 21 of (Ecuador’s) National Health Law implies the recognition of maternal mortality, teen pregnancies, and clandestine abortions as public health problems. The government must recognize that legal abortions are the key to guarantee the victims' health. It does not matter when or how; all women should have access to safe and legal abortion when they decide they want to. Public health issues require specific attention, firstly to prevent risk scenarios and secondly to provide solutions on a state level and to ensure the right of life which is guaranteed by the National Constitution.

The fight is not close to an end

In 2018, a historical moment for the feminist movement was witnessed in the country; the first campaign for legal abortion came up. Thousands of people gathered on September 28, the Day of Decriminalization and Legalization of Abortion. Thousands of females were protesting outside the Office of the National Prosecution; chosen place because of the 326 women criminalized for abortions.

On September 19 of the same year, the National Assembly debated the idea of decriminalizing abortion for sexual abuse. During the debate, feminist groups gathered in front of the Assembly. They were cheering, hoping, and thinking about a life of choice.  You could hear slogans such as “girls are girls, girls are not mothers”, “Down with patriarchy –it will fall, it's going to fall, up with feminism –it will overcome, it will overcome”. Alongside there were pro-life groups, they gathered as resistance with sculptures and prayers.

The deliberation had a negative outcome; with 65 votes against, 59 votes in favor, and 6 abstentions. Abortion continued to be penalized in sexual abuse cases. In this case,  71% of (the votes against were male assembly voters and only 29% female ones. From this data, we can suggest that female reproductive rights and body decisions are still governed and regulated by the governmental secularism discourse which is unfortunately under the control of religion itself and patriarchy.

Ecuador has had a history with conservative and socialist presidents that have never considered it to be an urgent matter. If religion continues to rule within the government, the reproductive rights fight will never come to an end. When debating abortion, assembly members must consider the fact that the chances of dying during labor are higher than safe, legal abortion complications. Assembly members are responsible for the disappearance of these risks and the appearance of our rights. Legalizing safe abortions will not force all women to abort, it rather allows the action of choosing, and that is what women want. The choice of women’s rights.

Despite the penalization of abortion made by Congress in 2019, Ecuadorian women will continue fighting. Women’s rights and their bodies should not be ruled by a government or by religious beliefs. Girls should not be forced to accept undesired pregnancies or be forced to be mothers. A choice is all women are asking for.

Martina Vergara Granda is an Ecuadorian student currently studying in Brno. She connected with CWL to offer her knowledge about reproductive rights in Ecuador. The tendencies to restrict women's rights appear around the world and for Czech, the closest example is in Poland where they banned abortions except in case of rape. Martina's article helps to understand the impact of the total ban on abortions on women's health, safety, and life and the importance of the women's movement in the fight for reproductive rights.