Disrupting the continuum of violence against women and girls in Europe: Women’s organisations call for “revolution, not reform”.

Disrupting the continuum of violence against women and girls in Europe: Women’s organisations call for “revolution, not reform”. 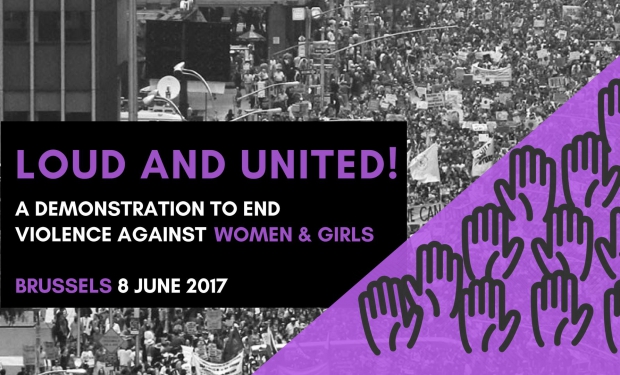 20 years loud and united. Today in Brussels, the European Women’s Lobby (EWL) organises an international conference and demonstration gathering more than 350 experts, professionals, decision-makers, women’s rights defenders, and activists from all over Europe.

These events, are to mark 20 years of action by the EWL’s Observatory on Violence Against Women and Girls, a unique network that has played a key role in advising the EWL about the reality of violence against women in the European Union (EU) and fuelling EWL’s advocacy messages and demands.

The Observatory was created in 1997 to monitor the commitments made by the EU member states after the Beijing Conference on women’s rights in 1995. As a political body, EWL’s Observatory ensures that Violence Against Women and Girls is high on the political agenda and that decision-makers are accountable for their commitments. It was thanks to its Observatory, that the EWL issued the first European data on domestic violence in 1999.

“We are far from a Europe where all women and girls can live a life free from violence. 1 in 3 women is a victim of male violence in her lifetime. 50 women die every day in Europe. A man rapes a woman every 8 minutes. Women and girls are trapped in prostitution markets, are victims of female genital mutilation, and face street harassment every day. All forms of Violence Against Women and Girls have the same goal: to silence women, maintain them in a subordinate place, and to maintain hierarchical roles between women and men”, explains Edith Schratzberger-Vecsei, EWL President.

Real change, not just a reform. 20 years since the Observatory was established, EWL members are welcome the European Commission’s 2017 “EU Year of focused action to end Violence Against Women and Girls It is important that the European Union stands ready to accede to the Istanbul Convention:  the 2011 Council of Europe Convention that is the first legally binding treaty in Europe that criminalises different forms of violence against women and domestic violence.

“While we acknowledge this progress, we today challenge Europe to ratify, implement and invest in the Istanbul Convention, while recognising and drawing upon the expertise of women’s organisations. Violence against women and girls happens every day, everywhere. It is a European issue, which requires a European answer.  And this answer cannot be just a reform, it needs to bring real change”, says Iliana Balabanova-Stoicheva, EWL Vice-President.

This is why today’s EWL event invites representatives of the different European institutions to present how they commit to address male violence directly and mainstream the issue and its impact across all European policy areas.

The power of women’s organisations supporting survivors and campaigning for change is visible through the interventions of several activists who present impactful initiatives, such as the instrumental everyday support work provided by sexual violence centres or women’s houses, innovative artistic projects raising awareness on sexual exploitation, or women’s tribunal bringing the voices of women and girls in the public sphere.

“It is not true that we don’t speak out. Reality is that our voices are not heard and not valued equally. This is why violence against women is a political issue. Only the ones who want to maintain inequalities and gender injustice have something to loose when male violence is abolished and mentalities are shifted”, says Fiona Broadfoot, survivor of the sex trade and founder of the survivor-led project Build A Girl in the UK.

Tribute to resilience, strength and solidarity, with feminist icon Gloria Steinem. Globally recognised feminist activist Gloria Steinem is joining EWL event and demonstration. Together with 350 participants from across the EU and Belgian women’s organisations, she is marching the streets of Brussels to demand real action and real change. This moment of solidarity sends an important signal to the European Union about the commitment of women’s organisation to continue to advocate for a Europe free form all forms of male violence against women and girls.

“More than poverty, natural resources, religion or degree of democracy, violence against females is the most reliable predictor of whether a nation will be violent within itself or will use violence against another country — and gender violence has become so great that for the first time, there are now fewer females on earth than males”, says Gloria Steinem.

“Violence against women and girls is not accidental, it is structural. It depends on all of us. Let us continue to disrupt the silence and the indifference! And let’s always think of the last girl, if we really want to end male violence and bring gender justice”, Edith Schratzberger-Vecsei says, while demonstrators raise their hand and share slogans and songs under the motto Loud & United.

The European Women’s Lobby (EWL) is the largest umbrella of women’s associations in the European Union (EU), working to promote women’s rights and equality between women and men. EWL membership extends to organisations in all 28 EU member states and the three candidate countries, as well as to 20 European-wide bodies, representing a total of more than 2000 organisations. For a feminist Europe. www.womenlobby.org @EuropeanWomen