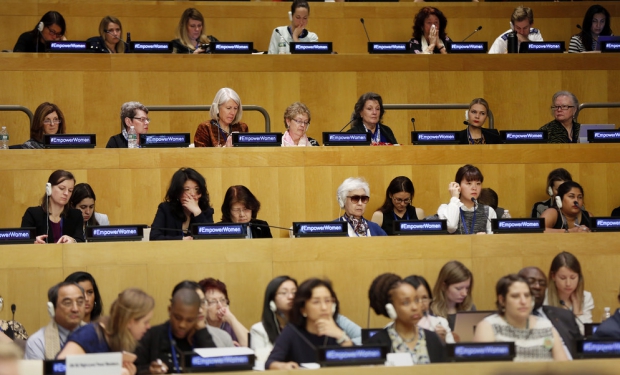 Over the last 20 years the media landscape has dramatically changed. New information and communication technologies have contributed to the advancement and empowerment of women, but have also created new ways of exploiting women and girls. When reviewing the CSW 62 theme on Women and Media we call on UN Member States to address the new and increasing ways in which women’s lives are being restricted. In particular, there is a need to combat online hate speech and threats against women and girls, the increasing prevalence of sexual exploitation of women and girls, sexist advertising and pornography.

Women are still less visible in media than men. The figures have barely improved over the past two decades, despite the fact that the Beijing Platform for Action explicitly raises the issue. Men are still predominant among experts, whereas women more often are represented as the general public. The last Global Media Monitoring Project (GMMP) from 2015 shows that women are significantly less likely to be heard about or read about in news (24 percent). This has not improved since the previous report from 2010. Similar numbers are reflected in online news stories and tweets, which confirms the invisibility of women.

Financing for gender equality in media is crucial in order to meet the commitments of CEDAW and the Beijing Platform for Action as well as the 2030 Agenda for Sustainable Development. Initiatives such as The Global Media Monitoring Project need stronger financial support in order to further develop consistent and comparable data on all countries, not only countries that participate voluntarily. Furthermore, The Global Alliance for Media and Gender (GAMAG) could be a vehicle for change, if properly financed and developed.

Equal participation and representation of women in media is vital for a democratic discourse and society. There is a need to implement the commitments and internationally agreed goals by States Parties to CEDAW and the Beijing Platform for Action which calls for combating stereotypes and giving women access to media. The 2030 Agenda for Sustainable Development depend on the full participation of women and men in all areas of society, including the media. We must secure freedom of press and freedom of speech, since gender equality and freedom of expression are interconnected.  Furthermore, it is essential to improve women’s leadership roles and working conditions in the media. In order for the content to be non-sexist and gender equal, the environment where it is produced has to be free from discrimination, harassment and abuse.

Stereotypical portrayal and sexualization of women in the media is a widespread problem, which is increasing as the media landscape changes and expands. Rape culture is prevalent on the Internet, as well as the sexualization and normalisation of male violence. Research show that that everyday exposure to sexually objectifying portrayals of women in media is associated with increased body dissatisfaction and self-objectification by girls and women, as well as greater support for sexist beliefs and higher tolerance of sexual violence against women.

Sexist advertising is particularly affecting the mental health of young women. In a study conducted by the Swedish Women’s Lobby in 2013, nine out of ten female respondents between 13 and 30 years of age answered that advertising has made them feel bad about their looks and that that it made them want to change something about themselves.

Online sexualized violence and pornography is an urgent issue to be addressed. Today, images of rape, sexual torture and degrading of women is available in every laptop and smart phone twenty-four hours a day. Violence in pornography has increased remarkably, while the consumers have become younger and younger. Research show that pornography normalizes sexual violence against women and girls, and that it limits healthy sexual relationships. Our children and future generations need to be able to develop their own sexuality, free from pornographic images of sex as connected to violence, humiliation and assaults.

Online hate speech, harassment and threats against women is rampant and have become an integral part of everyday lives of many women and girls. Online hate speech has serious consequences for the ability of individuals to communicate and act freely in society and is limiting women’s and girls’ lives. Women taking on a public role are more exposed to hateful speech and outright threats. This is a democratic problem which needs to be addressed.

Today women and girls all over the world live a big part of their lives through social media and on the Internet. But even though they are just as likely to be subjected to violence, exploitation and other crimes online as they are offline, there are hardly any tools to protect them and uphold their human rights. Unlike society at large, the world online world often lack regulations. These double standards and prevailing impunity are a betrayal of women and girls and needs to be urgently addressed.

We urge UN Member States to:

The Portuguese Platform for Women's Rights

The Left Federation of Swedish Women

Roks, the National Organization for Women’s Shelters and Young Women's Shelters in Sweden