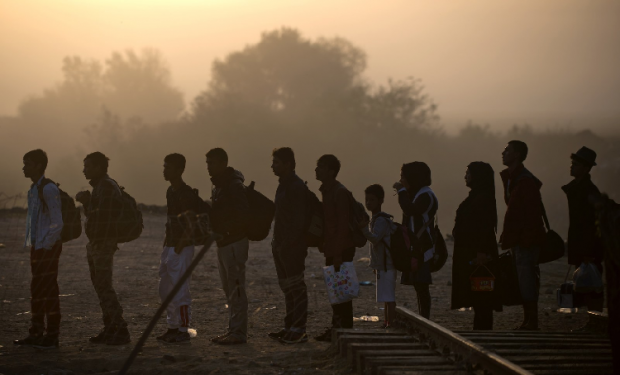 HEIDELBERG, Germany; BELGRADE, Serbia; and TOVARNIK, Croatia — Layan’s thick, black hair is a waterfall. It zigzags down her back in frizzy waves. In normal life, in the better days back in Damascus, it was all smoothed out, closer to curls, but things haven’t been normal for a while, and right now, in a Heidelberg refugee camp, her hair is the least of her problems.

It’s her glasses that are driving her crazy. They snapped on both sides somewhere between Macedonia and Germany. She’s wrapped them with white tape so thick it looks like gauze, but inevitably, they fall apart on her face while she’s talking. Layan can’t see much without them — people and places become shapes and shadows — but she just presses them back together and hopes for the best. It’s the only way.

Layan is practical, focused, and no-nonsense. She’s a fighter, which is not a thing you should have to be at 15.

These are traits that came in handy when a man tried to snatch Layan at a public restroom in Macedonia.

It was evening, around 8 p.m., and dark. Layan was waiting for the bathroom, in a mixed line, men and women all waiting for their turn. There was a bar nearby, and some of the men around were drunk. She felt someone grab her, just above her wrist, and then try to wrap a hand around her mouth. She was already screaming — shrieking her brother’s name, pushing out any sound she could. Her screaming caught the man off guard, and her brother came running. The assailant — a man she thinks was a Macedonian — ran away.

Layan and her mother think the man wanted to rape her, and it turned the brave teenager timid. “After that, I was always with my brother,” she said.

Layan was lucky, but there are probably hundreds of moments like this on the dangerous journey that nearly half a million people have already made this year from Turkey to western Europe. It’s a journey that seems safer than the alternative: Most are escaping Syria’s nearly five-year civil war, which has killed an estimated 250,000 people and forced another 4 million to flee. Others are fleeing fighting in Iraq and Afghanistan.

There’s no official count of how many women are making this journey, and there’s hardly any official acknowledgment of stories like Layan’s, or those of other women who described to BuzzFeed News a danger that’s so far been invisible on this journey — those moments where a man senses opportunity, or feels his circumstantial power, and tries to coerce or force sex, or otherwise uses violence on women.

Find the rest of the article on