The Istanbul Convention: Ratify It and Fully Implement It Not Withdraw from It!

The Istanbul Convention: Ratify It and Fully Implement It Not Withdraw from It! 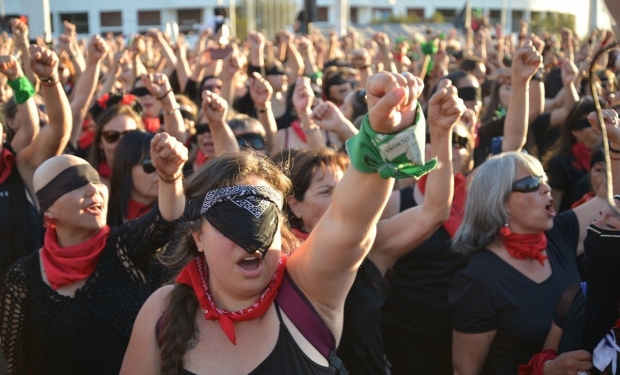 The Council of Europe Convention on preventing and combating violence against women and domestic violence also known as the Istanbul Convention is recognized as the most comprehensive legally binding instrument for eliminating violence against women and girls. The countries implementing the Convention are already seeing positive impacts as well as shortcomings and existing gaps during the implementation process. Despite all the efforts and progress, there’s an on-going backlash against the Istanbul Convention in number of countries who are threatening to rescind their ratification and dismantle all that’s been done by the women’s organizations. Hence, women’s organizations’ work on raising awareness and understanding in the society about the main purpose of the Istanbul Convention and debunking the false beliefs against the Convention is vital. These countries should not abandon their commitment to protect women and should protect women and girls in a joint effort at all costs.

According to the UN data, at least 144 countries have passed laws on domestic violence and 154 have laws on sexual harassment. However, despite these legal measures in 2017, 137 women and girls were killed every day by their intimate partner or a family member which adds up to 50,000 women killed by those closest to them. 62 million women in European Union have experienced either physical or sexual violence since the age of 15, according to the survey by the European Union Agency for Fundamental Rights. Yet, majority of the cases of violence against women (VAW) go unreported.

In recent months amid COVID-19 pandemic, VAW has become a shadow pandemic affecting women and girls all around the world. Calls to domestic violence helplines in many countries have increased and domestic violence shelters have reached capacity. Sadly, many women could not even get any help when they were stuck at home with their abusers during lockdown with nowhere to go.

VAW comes in many forms from domestic abuse, sexual harassment, and forced marriages to female genital mutilation and honor killings. However, VAW can manifest itself as physical and sexual but also emotional and economic. It is possible for some women not to realize that they are being abused when it comes to stalking, marital raping, or when their partner abuses them economically and emotionally. VAW is not only a clear violation of human rights with many harmful effects but also a significant economic burden for states and negatively affects their human, social and economic development.

However, even with such legal measures, VAW persists and not all legislations are compliant with international standards and recommendations. There are two main international treaties that deal with VAW – the Convention on the elimination of all forms of discrimination against women (CEDAW) of 1981 and the Council of Europe Convention on preventing and combating violence against women and domestic violence (Istanbul Convention) of 2014.

Istanbul Convention is the first legally binding comprehensive instrument to fight against all forms of VAW with its three pillars of prevention (in the form of education), protection (effective response for the victims), and prosecution (effective law enforcement). Istanbul Convention also requires the ratifying states to make legal amendments in their national legislation to reflect the provisions and standards of the Convention. Hence, the Convention promotes raising awareness and ensures that there are specialized helplines and shelters available for the victims, as well as setting high legislative and policy standards in the ratifying states.

What has changed since the Istanbul Convention came into force? Or is it just another fancy document stating what is wrong and how it should be? Fortunately, the positive changes and developments that came from the implementation of the Istanbul Convention are evident with the contribution of NGOs. Changes in legislation make it easier to persecute the perpetrators. For instance, a lack of consent became the key definition of rape rather than just proof of force in Finland. By criminalizing violence against women, law enforcers are becoming more competent to protect and help the victims, in turn, the victims are less afraid to report and trust the police and the government. This in turn, can discourage the perpetrators to act on violence as they can easily face persecution.

One great example of such a case comes from Serbia’s report. Serbia’s ratification of the Convention enabled women’s NGOs to put more pressure on the legislators to incorporate the minimum standards for preventing and combatting VAW. As a result, the provision of emergency barring or protection orders can be issued immediately by specialized domestic violence (DV) police officers to ensure the protection of women and children affected by DV. As a result, the total number of reported cases of DV has increased, prosecutors have requested the prolongation of police protection orders in almost 90 percent of the cases and one-third of newly reported incidents have resulted in criminal charges. Moreover, judges, prosecutors, law enforcement officers, and other legal experts are receiving specialized training to improve women’s access to protection and justice. Similar developments have been observed from Albania and Romania as well.

In the Canary Islands, the outermost region of the European Union, the Istanbul Convention entered into force in Spain in 2014. Through the implementation of the Convention, specialized service for victims of sexual violence has been created in 2018, specific programs on gender equality have been added to the Canarian educational curriculum as well as numerous initiatives being undertaken to raise awareness on gender-based violence.

In Finland, NGOs demanded separate financial resources and staff to be allocated to the implementation of the Istanbul Convention and as a result, the state has increased the funding for victim shelter services. Currently, there are 27 shelters in Finland, and 20 are run by NGOs. In December 2016, the state-wide 24/7 Nollalinja helpline was set up and has successfully reached out to Finnish citizens.

In Albania, with the comments and suggestions of the Network of Monitoring Gender-Based Violence consisting of 45 NGOs, successful law amendments were made in accordance with the standards set in the Istanbul Convention. As a result, a gap in the protection of survivors does not exist anymore and it is expected that measures against domestic violence will become more effective in the future. Another good practice developed in Albania was the direct implementation of the Convention during court proceedings allowing court decisions making a direct reference to the IC, not only on the legal basis but also in the reasoning part of the decision. Moreover, Albanian NGOs are utilizing the IC articles and GREVIO report findings as an advocacy tool to push for State accountability and addressing the failures to protect the victims.

Despite all these positive changes and developments, there are still many improvements to be made for the ratifying countries. Yet, for religious and political reasons some states are rejecting the ratification of the Convention and some are even talking about withdrawing from the Convention.

In July, Poland stated that it is preparing the formal process to withdraw from the Istanbul Convention which led protests of around two thousand people in cities such as Warsaw, Krakow, Gdansk, Poznan, and Lodz.

In response to the Turkish government’s plan on withdrawal from the Istanbul Convention, on August 5th Turkish women’s rights groups staged simultaneous protests against VAW and in support of the Istanbul Convention in several Turkish cities including Istanbul, Antalya, Ankara, and Adana. On the contrary, in Croatia, there were protests held in public squares opposing the Convention.

Currently, there are six member states of the European Union that have signed but not yet ratified the Convention – Bulgaria, Czechia, Hungary, Lithuania, Latvia, and Slovakia. These countries are rejecting the Convention mainly because of the word “gender” which is defined as “the socially constructed roles, behaviors, activities, and attributes that a given society considers appropriate for women and men”. Moreover, there is a common mentality in these countries where they think domestic violence is a private matter to be resolved within the family.

The ongoing backlash in Europe jeopardizes the successful achievements of the Istanbul Convention. However, women and civil society organizations of these countries recognize the importance of ratifying the Convention and voicing their disapproval, and this fight will continue on. It is also important that women’s organizations continue to fight for effective implementation of the Istanbul Convention, but also fight back against the backlash through raising awareness in the society about the main purpose of the Convention and debunk the false beliefs. The fights against VAW require not only state intervention and dedication but also a joint work of NGOs, society and international efforts with united voice.

Zdroj:
GOOD practices for the implementation of the Istanbul Convention
What’s holding back the fight against gender-based violence?
Impact of Covid-19 on Violence against Women and Girls
Facts and figures: Ending violence against women