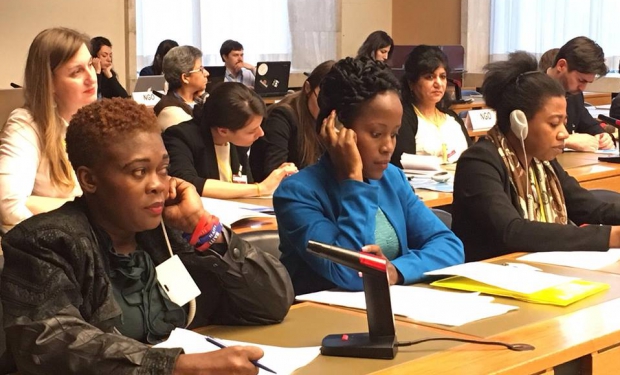 In 2015, Czech women's lobby released Shadow report which focuses on the Sixth periodic report of the Czech republic on the implementation of CEDAW (the UN Convention for the elimination of all forms of discrimination against women) in 2014. Two years later, in 2016 the next important meeting of the Commission, together with all member states of the convention, took place in Geneva. Czech republic was participating as well.

Thus on the 23th of February Czech republic presented report on how the state meets its obligations arising from the Convention (CEDAW). State representatives were also answering questions of 23 experts. Czech women's lobby was represented by its vice-president Eva Kavková, together with the project manager Hana Stelzer. Those experts together in joint cooperation with non-profit organisations draw attention to the cases of violations of women's right or whether rights of women exist just on the paper. Czech delegation did not accent only evermore mentioned unequal representation of women in politics and in employment, but also to the persistent pay gaps, ongoing violence against women or compensation to victims of involuntary sterilization. Among the main recommendations of the CEDAW committee belongs: speeding up the ratification process of the Istanbul Convention and taking practical measures that will lead to the improvement of the situation related to violence against women. As a key priority Committee considered mainly long-term financial support of the services provided to victims of violence and the regular and systematic education of police and security forces as well as judiciary stuff in the area of gender-based violence. In relation to the law regarding representation of women in political and public life, the committee recommends to introduce so-called "zip" system for the candidates of elected parties and create specific time frames to increase the representation of women, including roma women, women in the national assemblies, government and public administration, especially at higher levels.

To ensure the real equality of women and men in the labour market, CEDAW committee recommends to take measures to eliminate segregation in employment, start struggling with a lack of women´s unemployment, continue reducing the differences in remunerating women and men and combat discrimination on the labour market. The committee proposes to consider raising the minimum level of wages as one of the measures leading to reduce feminization of poverty. The committee further recommends to carry out targeted measures and helping to the financial difficulties of households led by one parent, specifically, it has recommended to consider the enactment of the part-payment for maintenance, especially as help for single mothers. Topic of the discrimination is very closely related access to justice for its victims. The committee, as in the previous recommendations, urged government to adopt a comprehensive system of free legal assistance for victims of discrimination and at the same time to ensure systematic training for judges, police officers and other professionals in the field of application of the principles of the Convention. The government got the recomendation to support for establishment of the institute of lawsuits in public interest in the area of discrimination.

Another topic was the compensation to coercively sterilised women. This systematic violation of fundamental human rights of women in Czechoslovakia was occurring mainly in relation to roma women and women with disabilities. Again, Czech republic was strongly urged to adopt a system of out-of-court settlements also for those women who currently could not obtain the compensation due to various obstacles. The government should also consider application of the three-year limitation period for those women, which may be in conflict with good manners. The state should also ensure that women have access to their medical records. The absence of this meassure is currently one of the barriers to access the justice. The establishment of a special expert commission for research on the extensiveness and frequency of this problem is also necessary.The committee also took a look at the issue of obstetrics. The state should adopt a protocol of normal birth, which would emphasize the avoidance of unnecessary after birth separation of the newborn from the mother, respect for free and informed consent of the mothers and to stop performing unnecessary and harmful interventions, such as a prophylactic episiotomy. State should take measures to ensure real and the free access to care of midwives and the existence of birth houses.

State should also remove unnecessary barriers for having childbirth at home. Like other international authorities, the Committee also stressed that the current practice of care for migrant women and mothers with children is unacceptable. State should adopt policies which respect the specific vulnerability of women and children in migration. It also pointed out the discrimination of migrant women, that do not have access to public health insurance and no possibility to achieve proper health care in the Czech republic.

In the area of right for family life, the Committee expressed serious concern on disabled women who may be limited in its right to enter into marriage and in the context of legal incapacity the right to care of their children. Therefore the committee explicitly called on the government to repeal the provisions of § 673 and § 865, § 2 of the Civil code, which allows the restriciton of those rights.

All related documents in pdf format can be downloaded in CEDAW section.

Recommendation of CEDAW to Czech republic