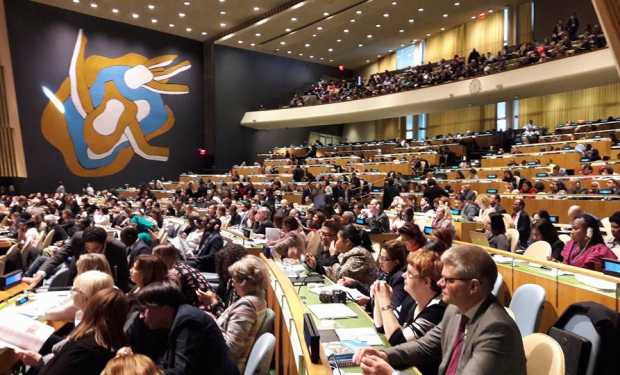 During the first week of the 61st session of the UN Commission on the Status of Women #csw61, the Swedish Women’s Lobby was given the opportunity to speak during an intergovernmental session. While the space for women’s organisations to influence the member states is shrinking, we are delighted that our Swedish members could address the national delegates and share the concerns and demands of women’s organisations in Europe.

Oral statement for general discussion from the Swedish Women’s Lobby

I am speaking on behalf of the Swedish Women’s Lobby – an umbrella for the national women’s movement, and a member of the European Women’s Lobby.

I’d like to start by introducing you to the economic man. He is a person driven solely by his own needs; his actions are rational and never affected by emotion. He was invented by the economist Adam Smith in 1776 and he continues to be the model that we use to design societies, systems and entire economies.

“Women’s economic liberation” is crucial to the 2030 Agenda. Without women being able to support themselves the 5th goal on gender equality and the 10th goal on reducing inequality cannot be reached. To promote sustained and sustainable economic growth and decent work for all (Bingo for goal number 8) women need to be on board like never before.

But women’s economic liberation is impossible in a system that is constructed with the economic man in mind. That’s why we have to challenge the way we run our communities, businesses and our world.

I will share with you three Swedish reforms that can contribute to this quest. Yes, our country has a long way to go before we reach gender equality but these actions helped us get the world’s greatest participation of women in the work force:

First: separate taxation. This is a groundbreaking reform from the 1970s that got women to work, and made women’s work count. It helped Sweden move from a male breadwinner-system to a two-breadwinner system.

The second reform has to do with: accessible, affordable and good quality childcare for all women, an absolute precondition to get women working. Today, almost 90 per cent of all Swedish children are in childcare.

The third, and last reform is: Gender equal, extensive and well-protected systems for parental leave. We also need to use parental leave systems to create an even distribution of unpaid work. In the Swedish women’s movement, we want to earmark half of the parental leave for each parent.

When talking about the changing world of work we need to define what is work and what isn’t. Prostitution is a legacy of the economic man, it is pure violence against women and incompatible with human rights. To be clear: Prostitution can never be described as work under the roof of the United Nations.

The reforms mentioned are victories of the women’s movement. Together with you, Excellencies and Distinguished delegates, we can fight the idea of the economic man. We can build a world were women can support themselves through decent work, a world where women’s work is equally valued, a world that is driven not by self-interest but by fairness, equality and love.