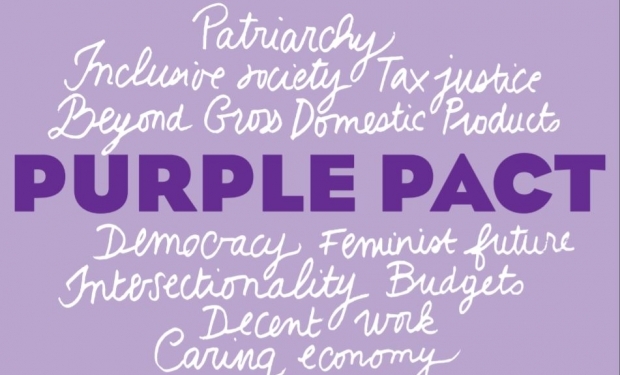 The EWL’s publication “Purple Pact: A feminist approach to the economy”, the result of the EWL feminist economics working group, provides analysis and recommendations to rethink the current macro-economic system from a critical feminist perspective.

The feminist approach to the economy embodied in the EWL’s Purple Pact takes as a starting point the full participation of women in all areas of life, and equal representation of women in all their diversity, at all levels of decision-making, including economic decision-making. It aims to build an inclusive economy for the well-being of all. The focus is a universal social care system with an infrastructure that can provide social and care services for all and quality services, which are accessible and affordable. It also stresses the fact that environmental issues have always been, and are increasingly, a matter of human rights and social justice and are thus feminist issues, and an integral part of feminist economic analysis.

The Purple Pact challenges the current macro-economic model founded on unsustainable growth, at the expense of exploiting people, especially women, and the environment, which has finite natural resources. The way in which we collect tax and measure growth and productivity (i.e. through GDP) completely ignores the invaluable contributions of women’s un-paid and invisible work. This work is often performed within entrenched stereotypical roles whereby men are the bread-winners and women are the caretakers. The Purple Pact proposes, inter alia, a Care Deal for Europe, which would respond to many current challenges, primarily care as a collective need and responsibility for both women and men throughout the life cycle.

The Purple Pact is intended to stimulate debate and exchange, an invitation to a broad range of stakeholders including decision-makers at national and European level, to seriously take on board feminist economic principles in future macro-economic policies. It comes at a very timely moment as the EU adopts its five-year Strategy on Equality between women and men.

The three pillars of the Purple Economy are:

Read an excerpt from the publication:

“The great mistake of economics is thinking of the economy as separate from the society of which it is part and the environment in which it is embedded.” Prof. Kate Raworth, Oxford University

Macro-economic policy, including fiscal and monetary policy, is all too often seen as gender neutral. But economic policy choices affect women and men differently because they occupy different positions in the economy, both market (paid) and non-market (un-paid). As UN Women describes it, “budget cuts that reduce social spending may increase the demands on women’s un-paid household labour, while trade liberalisation may negatively affect women’s employment in contexts where they are overrepresented in import competing sectors such as agriculture or food crops.”4 The measure of all success, and the yardstick of current patriarchal economics, is the performance of the Gross Domestic Product (GDP).

Feminist economics, however, urge us to think beyond GDP as a goal for governments to pursue growth and look instead for new measures of well-being.5 Feminist economists are engaging in exciting new analyses and campaigns emphasising the potential role of tax and public spending as a means to redistribute power and resources to women and to ensure the outcome of equality between women and men. Moreover, there are new, powerful and interesting allies in institutions and civil society in this struggle.

Our vision of feminist economics:

The full publication of the Purple Pact in its original English version can be found on the European Women's Lobby website or in the attachment below.